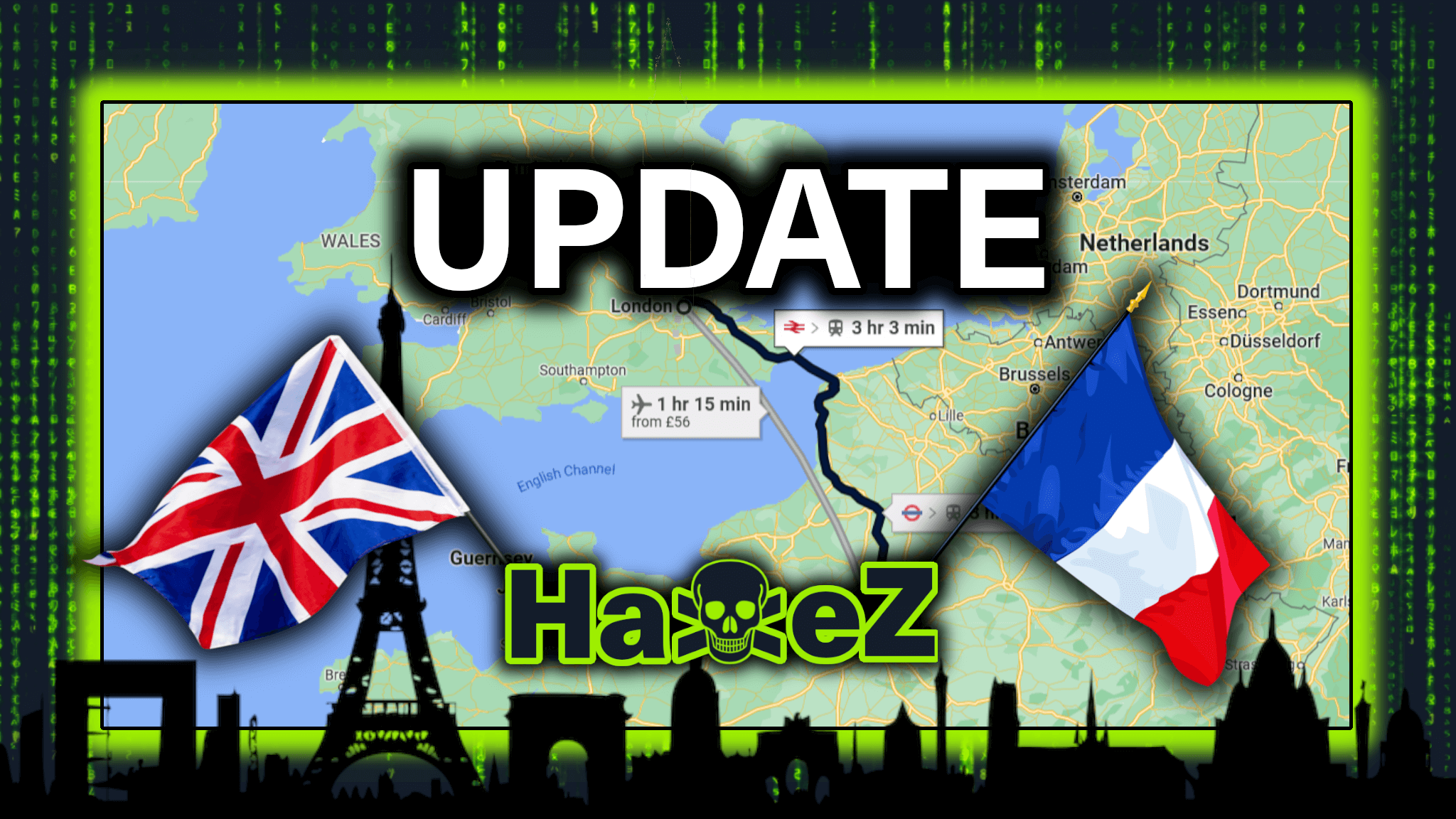 Hello world and welcome to Haxez, today I want to give an update about why I haven’t made content in a while. It’s been about a month since I last published a video or article and the reason for this is that I’ve been away. More specifically, I’ve been in Paris on a job and it was pretty awesome. I got to see a lot of the sights, experience a lot of the food, and met some incredible people.

So I was sent to Paris at the start of the month to perform a test for a client. I got the train from my home city to London and then navigated the maze that is the London underground to get to Kings Cross St Pancras. From there I took the Eurostar to Paris where I met up with my colleague at the hotel. The hotel was ok, it was a 4-star hotel and had a pool but I have to say the internet was terrible.

I had a fairly early night the first night but the next day my colleague and I went adventuring around Paris. We had the worst McDonalds that both of us had had but we scoffed it down and set about sightseeing. Our first stop was the Louvre Museum which is quite a famous landmark, it has two glass pyramids and has been in films such as the Da-Vinci Code. It was a pretty spectacular sight to behold but we moved on.

Paris has some awesome bridges that cross the canal or river. It stretches for miles and there are frequent bridges and we coincidently happened to walk across the one that has all the padlocks on it. Something about people in relationships, they write their name on the padlock and lock it to the fence. I had read somewhere that they were planning on cutting them all off because the weight had become too much. Who knows, perhaps there is some other bridge somewhere where that is the case. Anyway, that was interesting.

We then popped to the Eiffel tower and I have to say, it is pretty tall. It’s quite challenging to process the scale of things when you’re an ant on the ground but that thing was huge. We didn’t go up as there were other things we wanted to see but we said that we would come back and do it. We grabbed a bottle of water and decide to chill out for a bit, my legs were starting to hurt. Other than a weird encounter with some overzealous guy trying to force a friendship bracelet onto my arm it was a pretty awesome experience.

We then marched on to see the Arc De Triomphe and I have to say that thing impressed me the most. That was monumental in scale. It reminded me of the gates to Outland from the Burning Crusade World of Warcraft expansion pack. I’m sure someone has done the maths but I genuinely wonder how much it weight because it looked heavy.

Anyway, we managed to get a bit lost on our way back. The trains back to where we came from were canceled so we were in a bit of a pickle. My French is poor but luckily the French people were extremely helpful and pointed us in the right direction. My colleague saved our asses as by that point I was too tired and my brain wasn’t functioning at all. We made it back after about a 24km walk and lots of sunburns (ouch).

It was the next day and it was time to go to work. We met up with the client and they walked us through what we would be testing. They were great guys and were very knowledgeable about Cybersecurity. They were also laid back and easy to have a laugh with. It didn’t feel like work for the first few days we were there as we were getting to know the system. However, as you can imagine, a whole month away from home is a long time (subjectively) and you start to get homesick. Our routine was to get to work at 9:00 am, eat lunch around 12:30, and then finish at about 5:00 pm. We would then normally eat out in a restaurant (Los Nanos I miss you).

That routine continued for the majority of the time we were there. However, on the weekend before our last, we decided to head back to Paris. This time I was prepared with suncream. We headed back to the Eiffel tower and were able to get the lift up to the second floor. We had a fantastic view of Paris and were even able to have a cheeky beer while we were up there.

I had recently heard about the Stranger Things shop from one of the Film Theories’ videos about Stranger Things. Well, it goes without saying that we had to go and see it. So we punched the location into Google Maps and made our way there. There was a bit of a queue outside but it was well worth the wait. It was like stepping into a TV series. Obviously reading about it and seeing pictures won’t do it justice but it is well worth a visit if you’re a fan and are in the area.

We then visited a few other landmarks including the Pantheon and Notre Dame. Both were magnificent but admittedly the experience was somewhat tarnished by the scaffolding around it.  Regardless, it was still a sight to behold. The whole of Paris is honestly, the buildings are so large and well crafted. I can’t think of a word to describe it but it is like nothing I had ever seen before.

Clash at the Castle

Moving on to the final weekend, I thought it would be a good idea to go and watch WWE Clash at the Castle in Cardiff. I had my tickets booked for months (Thanks Karl) and thought I would have been back from Paris by then. However, due to unforeseen circumstances, the project was pushed back by a week which meant it overlapped with Clash at the Castle. I decided to go back anyway. However, after booking my flight with EasyJet and turning up at the airport, they told me that I didn’t have a seat. Ok, so what did I pay for? Well, it turns out that is a common scummy practice with airlines where they oversell their tickets. Fortunately, someone didn’t turn up for their flight and I was able to pinch their seat. I got a lift home and then drove myself and two friends to Clash at the Castle.

That was an awesome experience. I then drove back to the Airport, caught the flight back to Paris to work one day, and then got a flight back home. All things considered, everything went better than expected. I was expecting so many things to go wrong but it all turned out ok. I have to say though if it wasn’t for my colleague I sincerely wouldn’t have lasted the full month there. They kept me sane and were an absolute pleasure to work with.

Anyway, that’s where I have been. Now that I’m back I should hopefully start creating more content. I’m very eager to start going through the TryHackMe Red Teaming learning path so will probably be creating content about that.